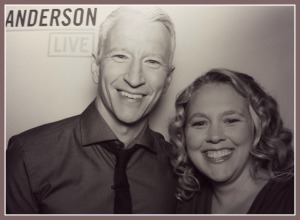 Yesterday was an exciting day a HubPages Headquarters- the office was abuzz with talk about Julie DeNeen, an Apprentice who was the featured blogger on Monday’s Anderson LIVE. The live talk show features a new blogger in each episode who tweets and blogs the episode’s events, and with her great Hubs, a carefully cared for personal blog, and social media savvy, Julie DeNeen made for a perfect candidate.

We asked Julie DeNeen to share more about her live television experience (and other media encounters) in the interview below. Read on for an insider’s view of an interesting combination of news, television, celebrity, blogging, Hubbing, and social media.

Prior to this experience with Anderson LIVE, had you worked at all with the media (be it in the form of newspapers, local news, magazines, or some other more formal establishment)?

Well, this is a bit of a longwinded complicated answer (laughing), but yes I have dealt with the media before. Not necessarily as a freelancer directly (since I am pretty new to this career), but back in 2011, I was involved in a very complex and traumatic adoptive reunion. This resulted in the launching of an online organization (with my dear friend and fellow Hubber Carly Sullens) designed to help those in complicated reunions. Because of our blog and online presence on the issue, we have attracted international attention. We’ve been featured on CNN’s Dr. Drew, and we also had a web article written up by ABC, along with other various global magazines and news. This November we’ll be in Madrid, Spain to speak at the national Spanish Adoption conference over the Thanksgiving holiday.

Were you informed of the opportunity on short notice? That seems to be common with situations like these, and if that was indeed the case, how did you deal with the rush?

Yes I was. The email came in on Saturday afternoon and I was on a train to New York City around 5am on Monday morning. The same happened with my other media interviews. The news circuit seems especially prone to “fast and furious” stories. I’ve quickly learned that if you want to get on television because of your work, you must be prepared for these on the fly interviews.

What advice would you give to other Hubbers who get last minute inquiries from the media?

There are simple things you can do to be prepared. Have a standard professional outfit available. Freelancers don’t often leave the house, so you may think, “I don’t need a fancy outfit.” Have one just for situations like these! Other than that, just make sure you are easy to reach by phone, email, etc. Producers want to be able to get in touch with you quickly, and they will move on to another candidate if you don’t respond. If you are a mom with young children, have babysitters you can call on short notice.

As always, keep your content fresh. As a writer for an online education commentary, I sometimes have to go looking on 50+ education blogs a day. If I see that a blog hasn’t been updated in a week, I move on. Others might do the same; so once you commit to an online platform (be it Hubpages or a personal blog), keep it organized and up to date!

Your role on the show was to blog and tweet about what happened live as events were unfolding. Each Anderson LIVE show features a blogger who does this, which we think is pretty neat! Why do you think a live television show has decided to engage with the online content world in this way? Do you think is the best way to do it?

You know, I haven’t thought about it much before this experience, but my first reaction is that they are ahead of the curve for television and I hope it keeps them on air for a while. Honestly, I think it is brilliant. How fun is it for audience members and viewers at home to be able to interact with each other? I think it draws the viewer in. For the audience members that get to tweet live, it is just another way to keep people involved.

As for the blogger idea, it is pure genius. The show gets free advertising from well-known (and little known) bloggers, as well as lots of backlinks to their site. The blogger gets promoted on the Anderson LIVE website. I hope other shows start doing this as well, since it is essentially a win-win situation. That is, unless some blogger writes a negative commentary. But come on, who can say anything negative about Anderson Cooper?

What was your favorite thing about the experience?

Is it lame to say my favorite part was the 60 seconds I got with Anderson? I have always admired and respected him as a news reporter and journalist, and had to pinch myself when I was in a photo booth getting my picture taken. I’ll never forget it.

Finally, what would you recommend to other Hubbers who might like to become more engaged with television, radio, news, or print?

There is a fine line between aggressively going after what you want, and becoming an obnoxious “toot your own horn” spammer. Know the line! While it may be difficult to decipher, online writers are in a seriously competitive market. You need some way to stand out from the crowd and that involves some risk taking. However, it is important to have an awareness of the writing community by supporting and promoting other’s work, and learning from those who are a few steps ahead. This will pay off later.